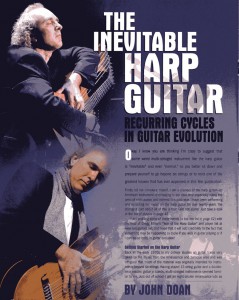 These guitars all had an extended bass range with up to twelve additional strings. I even found a harp guitar made by Chris Knutsen in Port Townsend, Washington from the late 1890’s with seven additional super-trebles attached to the right of the ordinary six strings of the guitar. In time I acquired a Gibson harp guitar (literally hundreds were made in Gibson’s first twenty years), a Dyer harp guitar (made by the Larson brothers and still popular today especially since adopted by such great players like Michael Hedges and Stephen Bennett, among others), and various lesser known makes. I finally commissioned a twenty-string harp guitar (perhaps the first modern constructed harp guitar design in our times) from John Sullivan and Jeffrey Elliott of Portland, Oregon in 1985 and haven’t looked back since. *(note: William Eaton was building amazing multi-stringed creations of his own even before this). END_OF_DOCUMENT_TOKEN_TO_BE_REPLACED