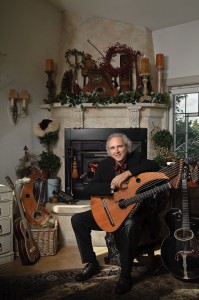 Doan plays more than a dozen turn-of-the-century instruments once popular in American parlors, on vaudeville stages and in mandolin orchestras. He explains their history in a entertaining and often zany fashion, shows slides of old catalogues and archival photographs, and leads the audience in singing (or whistling) many of our most beloved carols. John will include several arrangements from his CD, “Wrapped in White: Visions of Christmas Past.”
END_OF_DOCUMENT_TOKEN_TO_BE_REPLACED

John played “Hark the Herald Angles Sing” on the crankorgan, “It Came Upon a Midnight Clear,” and “Go Tell It On the Mountain” featured on his CD Wrapped In White and Victorian Christmas DVD. He also showcased zithers, banjos, guitars, and other ancient stringed instruments.