The following are press reviews, articles, and interviews of John Doan, performer and master of the 20 string harp guitar.

“John returns audiences to a time when we use to dream before movies did that for us. The interesting thing about the harp-guitar and especially the way that John has mastered it, is that the music issuing forth seems like magic, magic put back in the hands of the magician. No special effects or illusion, real hands on real magic. Where all of this music is coming from seems like a mystical experience. He’s an outstanding composer and arranger as well. His take on any tune is always a remarkable vision.”
Mason Williams: Composer of Classical Gas

“I have no idea where I have been for the past several minutes! What incredible music you make!”
Doc Watson 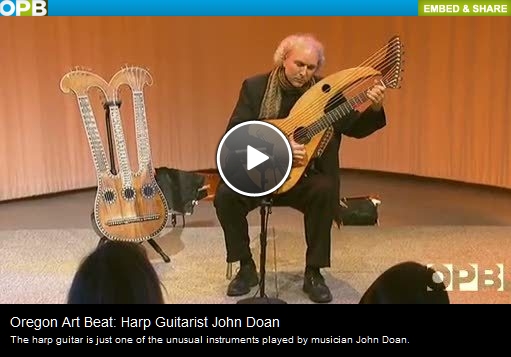 “John’s music is simply beautiful. No, it is more than that, it is heavenly!”
Burl Ives

“John Doan is one of my best discoveries and is an undiscovered treasure…I honestly believe we need more quality class-acts in our business of show, and John is exactly that.”
Randy Sparks, Founder, The New Christy Minstrels

“The harp guitar of John Doan is twenty strings of magic. Even after watching, I’m still not sure how he managed to do all that!”
The Rocket – Entertainment Magazine

“A Christmas To Remember With John Doan ” reminds us, in a way that is funny, musical, and touching, how we might find something we’ve lost from our homes and hearts.”
Oregon Focus Magazine (May 25, 2006)

“John Doan’s A Victorian Christmas is a stellar performance by one of Oregon’s finest musicians, an old-fashioned holiday sing-along for all ages, and a history lesson woven in one.”
Jefferson Public Radio (May 25, 2006)

“John Doan…has created a new Northwest tradition with his annual Victorian Christmas concerts. It is a special holiday gift.”
Oregon Focus Magazine (May 25, 2006)

“Queen Victoria might be amused by John Doan’s Victorian Christmas…She might not recognize the American carols, but the tiny banjuerine would surely bring a smile to those stern lips.”
The Oregonian (May 25, 2006)

Thank you for your outstanding performance. Since making beautiful music is the ultimate outcome of the luthier’s craft, it was our privilege and pleasure to be able to experience your artistry on the harp guitar. Everyone was delighted to hear you. Thanks for helping to make our convention a great event.

“I can’t tell you where I have been these past several minutes except to say that I got lost in your beautiful music! Where do you get one of them things?”
Doc Watson (Sep 10, 2006)

“John returns audiences to a time when we use to dream before movies did that for us.”
Mason Williams (Jan 26, 2007)

“John has restored my faith … there is still new and exciting music for the guitar.”
George Winston (May 27, 2006)

“… the harp guitar of John Doan is twenty strings of magic. Even after watching, I’m still not sure how he managed to do all that!”
The Rocket – The Northwest Music and Entertainment Magazine

“I think your music is really beautiful and atmospheric.”
Sally Oldfield (May 27, 2006)

“I’ve always enjoyed the Victorian Christmas Series, what a brilliant concept – grassroots musicology – take us back to the parlor, with the carpet, the couch, the Christmas tree, the magic lantern, and that necessity that if you wanted music, you had to make it yourself. Early on we (collectively speaking) went through the banjo craze, the mando orchestra craze, the ukulele craze, but the guitar has stuck, and will survive, I predict, for hundreds of years like the violin. Great Show!”
January Williams (Jul 31, 2006)

“John’s performance involves more than just playing music. He is an entertainer, storyteller, and educator. His stories which are derived from travel and personal experience, help the audience understand the motivation and inspiration behind his music. In addition, John’s personality and presence speak intimately to those he comes in contact with. This allows the audience to become personally involved with his music. This adds a valuable dimension to his performance.
University of Wisconsin, River Falls, Wisconsin

“Your concert was our first sell out ever. Every seat was not only filled, but filled with enthusiastic, happy listeners who have sung your praises ever since. Several people have commented on your ability to weave stories and music into a captivating and enchanting evening’s entertainment. The concert was a delightful trip into a world of sound and new sight, and we all enjoyed the history lessons along the way.”
Chemeketa College, Salem, Oregon

“Thanks for a great evening of entertainment that was much appreciated by our capacity audience. Your stories and your high level of artistry made for a wonderful performance. Also a big hit with the audience was your willingness to stay afterwards and talk to the many people who came forward to see you and to get a closer look at your instrument.”
The Lincoln Theatre, Mount Vernon, Washington

“What you do on stage touches all so deeply. For my part, as a businessman, you add culture, history, craftsmanship, and uniqueness that helps to build the esteem of our series.”
Stephen Said – President, Dosey Doe, The Woodlands, Texas