Traveling in Russia was an adventure filled with tremendous history beholding great art and architectural treasures, visiting historical sites, as well as extraordinary opportunities to share with the people my love of music and the harp guitar through lectures and concerts. It was fun to see how the people live today and to walk in the footsteps of Fernando Sor (aka. “The Father of the Classical Guitar”) who lived here from 1823-1826.

Adventures are filled with the unknown. Just walking down quiet streets and into small convenience stores I peak into a world not my own. 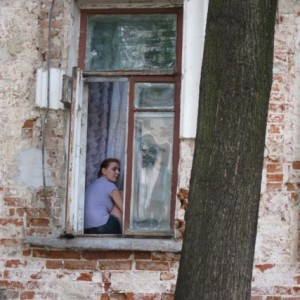 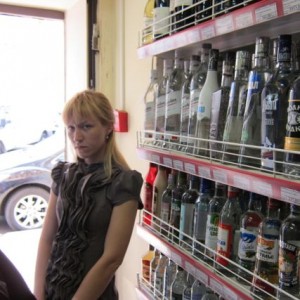 It is not that these people and this place are unknowable.  I am just a visitor hoping to share the moment by touching their world and in turn enriching my own and perhaps those with whom I share it as well.

History is filled with past moments.  One can read about history in books but what is really fun for me is having it come alive before my eyes. Historical places seem to possess echoes of the past and through visiting such sites the past becomes present. This attitude is behind my recent exploration of the world of Fernando Sor (aka. “The Father of the Classical Guitar”) who lived from 1778 to 1839. His life, music, and times have come more alive to me since I have gone to where he once lived and concertized in Spain, England and France. He also lived in Russia and so my quest to know him better became a part of this journey. 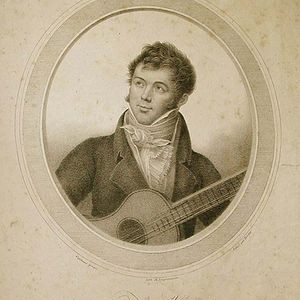 In 1823 he came to Russia with his ballerina wife to work at the Bolshoi Theater among other music activities.  The Russian people are fiercely proud of their contribution to the art of Ballet. Even their 100 ruble currency has the Bolshoi Theater pictured on the back. Sor was here when it was first built and although it has suffered the ravages of fire and decay over the years it is impressive to see the latest incarnation. 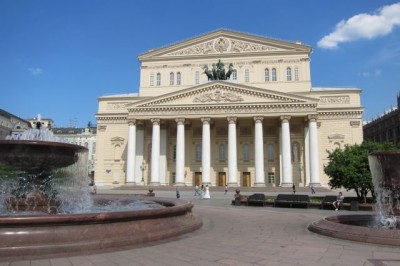 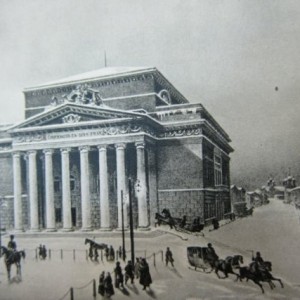 Few people remember that the Bolshoi Theater’s opening night on January 6, 1825 was filled with the music of Sor’s ballet Cendrillon.  Just sitting quietly in the shade of a fountain I could almost imagine a much colder and distant time when the night’s glory was filled with concert goers humming some of Sor’s tunes as they left in their sledded carriages looking back at the building’s pillars lite up in the glow of oil lamps with candle light pouring from its windows.

Since Sor and his wife worked with the ballet they very likely lived nearby.  Perhaps they lived in the building that is just to the right of the theater today. Could he have walked up those steps inside an open door or lived in that room above where chandeliers now glitter through the window. 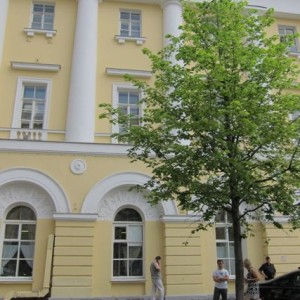 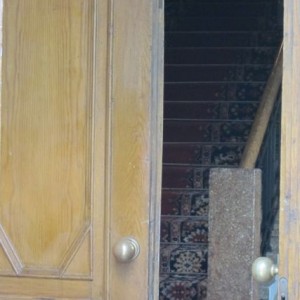 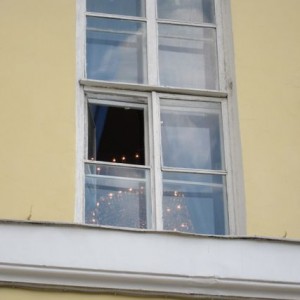 With the research of noted guitar historian Matanya Ophee and his fine article “Fernando Sor and the Russians” in hand (Soundboard XXXII, NO. 3-4, pgs. 13-29), and assisted by my host Andrew, I was able to find various houses where Sor was known to have performed. It was not surprising that they were within walking distance of the Bolshoi theater.

Sor could have tromped down a few snow covered streets with his guitar case in hand or traveled in a sledded carriage to the House of Gargarin on a quiet December night in 1823. People of high standing gathered in the dining area for dinner and afterward Fernando was asked to perform on the guitar.

A. La. Bulgakov in a letter to his brother remarked, “After dinner I heard the guitarist Sor. What a Talent! The guitar was made to sound like a harp, a harmonica, a mandolin, even like trumpets. Sometimes you had the impression that two guitars were being played. He plays the melody together with the accompaniment. With superb taste.”

No unlike Sor, I have enjoyed how my own concerts in Moscow have delighted audiences with new sounds of the harp and the guitar combined in multiple parts.  My work on the 20 string harp guitar has been defining a new sound for the instrument not unlike Sor’s impact on the guitar of his day. Standing before the House of Gargarin I could imagine similar audience responses centuries before. 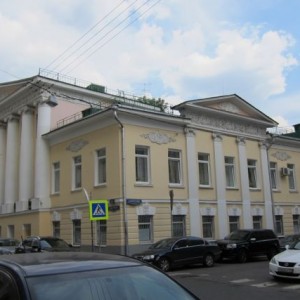 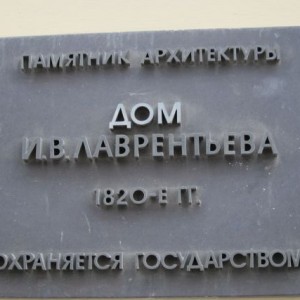 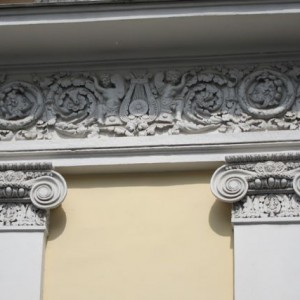 Just down the street and left up a boulevard I found the estate of Stepan Stepanovich Apraksin (1756-1827) an army general and heir to one of Russia’s noble families. Sor is also known to have played here. It was also a large structure that had an inner courtyard where the carriages would arrive with guests. Perhaps Sor’s carriage passed through this very corridor to the inner courtyard. Being there added dimension to my understanding of the musical life of that time and to the esteemed circles in which Sor lived and worked. 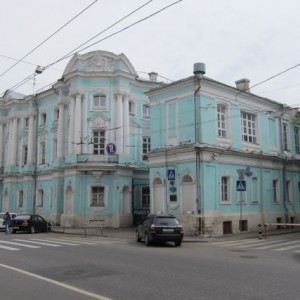 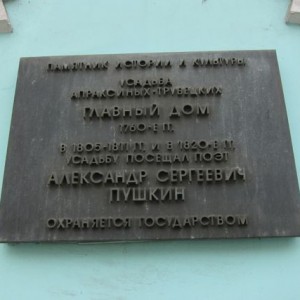 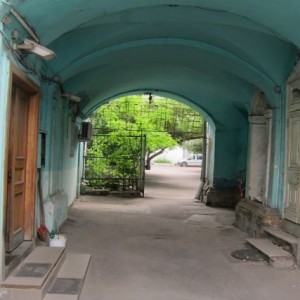 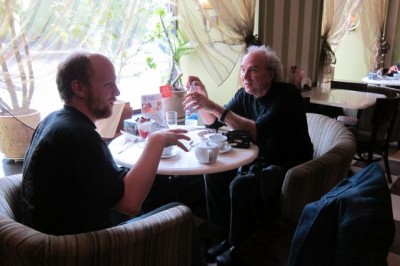 Afterward Andrew and I went to a nearby dessert shop.  Andrew had some tea, we both had some bottled water, he had a small sundae with fruit on top and I had a piece of Russian Blueberry pie. He was telling me that Moscow was a very expensive place to live and this area where Sor lived and worked was very posh then and still is to this day.

I was feeling generous and offered to pay the bill. I wasn’t expecting it to come to around $40 USD! Yikes! Perhaps this high life contributed to Sor leaving Moscow in late 1826 (although breaking up with his ballerina wife may have had more to do with it). Andrew thanked me for the treat and then remarked that he almost never eats out. I responded with the one Russian word I know. Da! 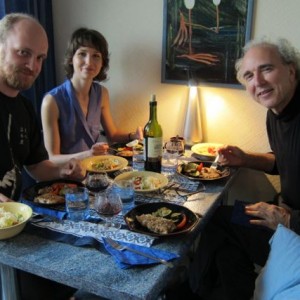 That night, like most Moscovites, we ate at home and had a great time visiting with he and his lovely wife Anna. It was more like an international night where Deirdra cooked Asian fish while Andrew brought Tuscan wine.  After dinner, unlike retiring to a concert room in a large estate to hear a soloist dazzle the guests like Sor had done, we huddled in a homey apartment and Andrew and I improvised Shakuhachi/guitar duets late into the evening. 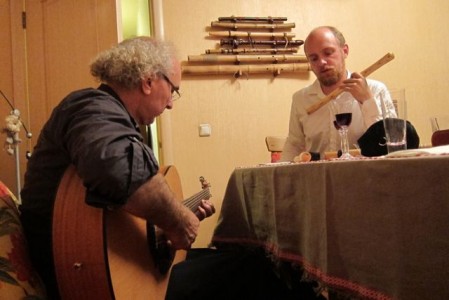 I continued to fall in love with Russia’s past and present more each day.

The Adventure continues in “From Russia With Love Part III” where I do concerts and lectures, visit the Kremlin and have a close encounter with a Russian bear.