He invited me to the small village of Ribeauvillé where some of the people still dress as they did one thousand years ago.
END_OF_DOCUMENT_TOKEN_TO_BE_REPLACED 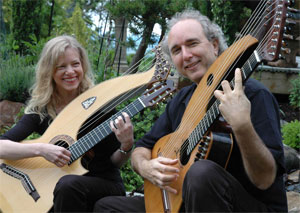 Muriel Anderson and John Doan will be performing together in concert in Portland, Oregon, on June 20, 2012, just after John returns from his successful European Tour.

The two virtuosos of harp guitar will be performing solo pieces and songs from their popular Harp Guitars Under the Stars duet album in this rare evening event.

In 2005, I hosted the third International Harp Guitar Festival (Sept. 3-4) at Willamette University where I am a professor of music. The event managed to attract a large crowd consisting of many students, faculty and staff, and members of the community nearly filling Hudson Hall for the evening concert.

We had just over 71 people attending the workshops and presentations from 4 countries and 14 states. Over a dozen harp guitarists came to perform (and I might add mystified the audience with their playing), an equal number of noted luthiers discussed their latest designs, along with three published scholars who made presentations of their research. The stage in Hudson was an absolute spectacle displaying 65 antique to modern harp guitars (a display the first of it’s kind). This was largely due to the temporary loan of two crates of rare instruments shipped up from Los Angeles from the Miner Museum.

It is a humble group that has grown in numbers over the years and promises to continue to evolve. Go to Harp Guitars for information on the next Gathering.

You can see comments and photographs of the event and pictures of the International Harp Guitar Festival workshops and concerts.