Emmy-Nominated musician and storyteller John Doan will perform his acclaimed “Christmas Unplugged – Reclaiming the Holiday Spirit” program December 2017 (see dates below). It is a refreshing and magical escape from the frenzy of our times. Experience Christmas past as if it were today with group sing-alongs and whistle-alongs, archival photographs, and the sound of a century old instruments (harp guitar, classical banjo, various zithers) rarely if ever heard today. John’s physical comedy interspersed with fine musicianship makes for a fun filled evening for all ages. 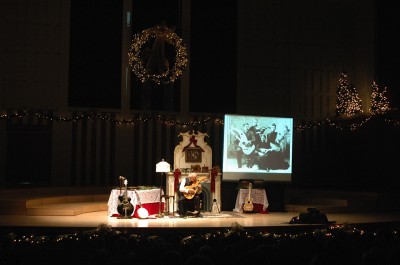 Advanced Tickets: $15.00 adults, $10.00 students and seniors. Tickets at the door: $18.00. Free Tickets: Willamette University students, faculty, and staff are available up to one week prior to the event (tickets are limited).

Tickets Available at: Willamette University Music Department or at the door. For more information and phone reservations call (503) 370-6255.

Tickets: $20 – contact John Westling at piperharp@earthlink.net. Seating is very limited and will be available for approximately 35 people. Standing room is available when all of the seating is taken. The audience is asked to bring pot luck finger food and drinks by 5PM with the concert to start at around 6PM. This should be a very memorable evening!

Presented By: MLA IEEE and GRSS

Presented By: The Museum of Making Music

“John Doan breathes new life into musty tunes with his pristine, intricate picking, which is laced with the delicacy of a snowflake … that evokes the nostalgic, mystical side of Christmas and leaves the shopping mall sentimentality behind.” – Billboard Magazine

“John returns audiences to a time when we use to dream before movies did that for us.” Mason Williams

“John’s music is simply beautiful. No, it is more than that, it is heavenly!” Burl Ives