John Doan was awarded The prestigious 2014 Brandlaureate International Brand Laureate Award for achievement, encouraging others in his respective field, and being an outstanding leader and brand. His award and life is featured in the current issue of “The Brand Laureate Business World Review” (April/May 2015). 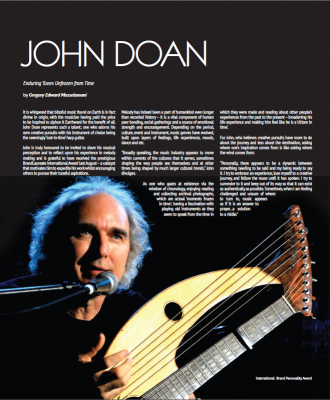 It is whispered that blissful music found on Earth is in fact divine in origin, with the musician having paid the price to be inspired to siphon it Earthward for the benefit of all. John Doan represents such a talent; one who adorns his own creative pursuits with his instrument of choice being the seemingly ‘lost-in-time’ harp guitar.

John is truly honoured to be invited to share his musical perception and to reflect upon his experience in melody making and is grateful to have received the prestigious BrandLaureate International Award last August – a catalyst that motivates him to expedite his work whilst encouraging others to pursue their tuneful aspirations.

Melody has indeed been a part of humankind even longer than recorded history – it is a vital component of human peer bonding, social gatherings and a source of emotional strength and encouragement. Depending on the period, culture, event and instrument, music genres have evolved, built upon layers of feelings, life experiences, moods, dance and etc.

“Broadly speaking, the music industry appears to move within currents of the cultures that it serves, sometimes shaping the way people see themselves and at other times being shaped by much larger cultural trends,” John divulges.

As one who gazes at existence via the window of chronology, enjoying reading and collecting archival photographs, which are actual ‘moments frozen in time’; having a fascination with playing old instruments as they seem to speak from the time in which they were made and reading about other people’s experiences from the past to the present – broadening his life experience and making him feel like he is a ‘citizen in time’.

For John, who believes creative pursuits have more to do about the journey and less about the destination, asking where one’s inspiration comes from is like asking where the wind comes from:

“Personally, there appears to be a dynamic between something needing to be said and my being ready to say it. I try to embrace an experience, lose myself to a creative journey, and follow the muse until it has spoken. I try to surrender to it and keep out of its way so that it can exist as authentically as possible. Sometimes, when I am feeling challenged and unsure of where to turn to, music appears as if it is an answer to prayer…a solution to a riddle.”

The article goes on to highlight his rich and varied career including his Emmy nomination for Eire, Best Celtic Album of the Year by the NAV Music Awards twice, the television premier of Victorian Christmas, and celebrated international tours, as well as his work as an educator and historian, especially with his research and revitalization of The Lost Music of Fernando Sor.

Founded in 2005, The BrandLaureate awards and magazine represents the very best that the world of branding has to offer. The awards are part of the Asia Pacific Brand Foundation (APBF) is a non-profit organization dedicated to developing brands in a myriad of business backdrops.