July 5-8, 2012 I hosted the 5th Annual Harp Guitar Retreat at my house in Oregon. The morning classes got everyone playing and even swapping harp guitars. 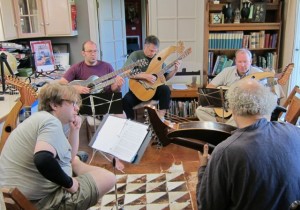 We worked on playing the sub-basses and super-trebles, basic music theory as applied to the harp guitar, chord voicing and intervals, cross string scales, the “Chord of Nature”, and looked at solo compositions and orchestral arrangements from my recordings.

This was Brent VanFossen’s first time with a harp guitar in his hands. Although an able guitarist for some years he was looking for an adventure and came out to the retreat.  He recently wrote, 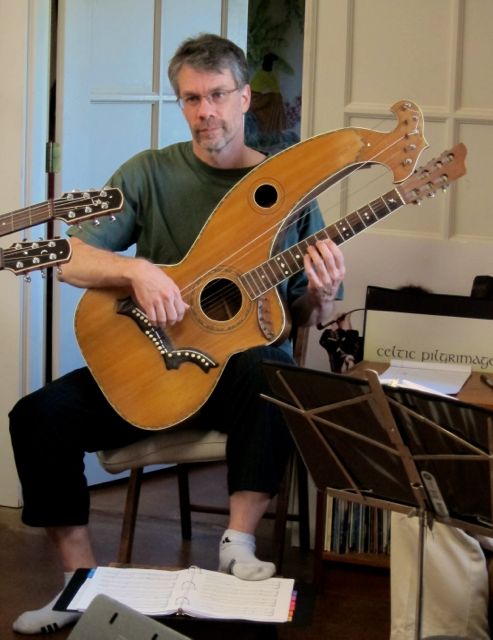 I want to thank you for the wonderful time I had at your Harp Guitar Retreat. You stretched me this weekend, studying and playing on an instrument new to me, but I had a great time, and I learned a number of things useful to me whether I ever play the harp guitar or not. Thank you so much for making me feel so much at home. The lessons were brilliant and I really enjoyed being around that group of such fine players.

I was honored to work with Brent and the other talented players and was thrilled with this great opportunity to share my pioneering concepts of what the harp guitar is, some strategies of playing it, and thoughts about the nature of music and composition. 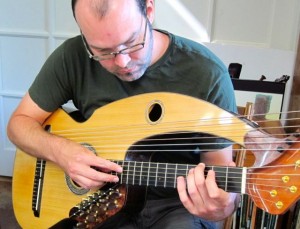 Will Brown is an incredible player that mixes in finger tapping, graceful improvisations, and many intriguing rhythmic elements to his playing. What a delight he was to work with.  I think the harp guitar may have in him a rising star. 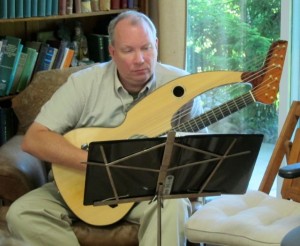 Jay Buckey was so much fun at the retreat always surprising us with his wit, great playing, and with what he calls his “nuts and bolts” arrangements. He is an accomplished player (3rd place in the famous Winfield Fingerstyle Competition and a recent 1st Place for best banjo player in all of California!). He showed no fear exploring the super-trebles and worked them into several pieces. 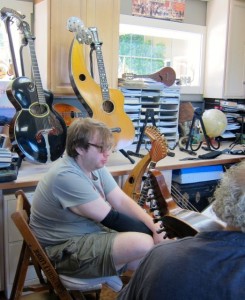 Nick Vest came up from Los Angeles to learn more about the harp guitar and to tie me for attendance at harp guitar retreats. He has been at every one!  Each time he specializes in a different area of study and this time he was going after playing original harp guitar music from a century ago.  I had a number of scores for him to bring to life so look for Nick to show us in future concerts and recordings the roots to the harp guitar in America.

Each day was filled with 24 hour harp guitarness. After the morning class conversations about the harp guitar spilled over into lunch, private lessons, dinner, and evening presentations, jams, and concerts.

Jay’s room for the retreat was in my music room.  The poor guy barely got any sleep as through the night he feverishly plucked his way around the room. 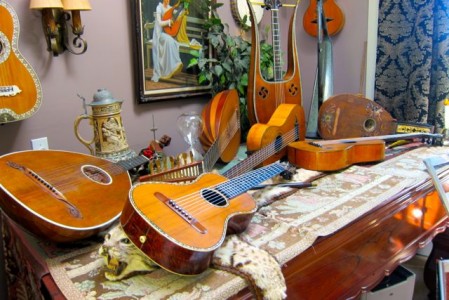 At various times during the day he slept while he played. Here is Jay playing his version of “Mr. Sandman.” 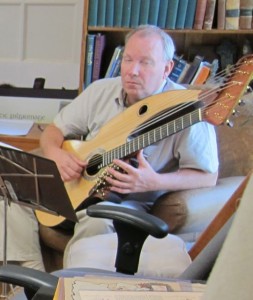 The evening concert Saturday night had close to fifty in attendance. I opened the show accompanied by breath taking views of the Willamette Valley out the windows to my left. 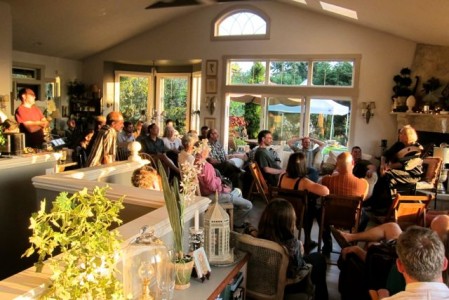 Nick followed with a dramatic piece he had collaborated on with a California composer. His deep concentration began just prior to his performance and held us all spell bound to the end. 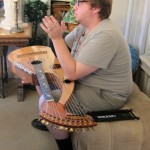 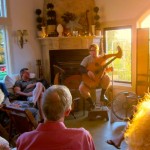 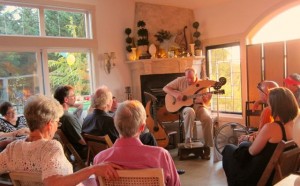 Jay then came up and played a medley of his own arrangements for the harp guitar on one of his own “Jay Buckey” harp guitars. He plays with such fluency and joy the room erupted with applause when the last note came to rest.

I broke up the concert with a bit of time travel playing on a variety of instruments from centuries ago. I debuted a few tunes from my upcoming Homage to Sor recording and concert (September 8th at Willamette University in Salem, Oregon). 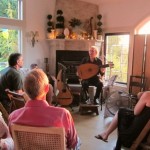 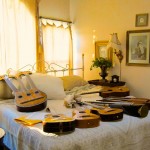 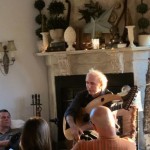 Then I returned with harp guitar music that joined in with the amazing songs of birds just outside the screen doors, not to mention the spectacular sunset from above the trees that served as as glowing backdrop. 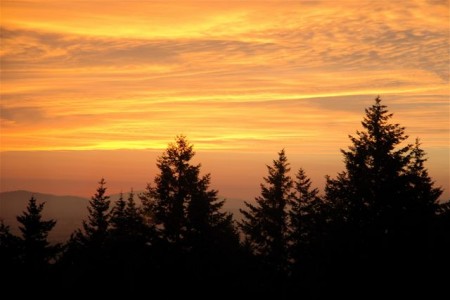 The audience and retreat attendees got to also enjoy a harp guitar gallery in the lesson room downstairs. My friend Steve Bissell generously donated for the occasion his huge Gibson harp guitar and Dyer style 8 to go with my Gibson and Dyer style 6, an 1890’s Knutsen, a 20 string Milburn, as well as various others makes. 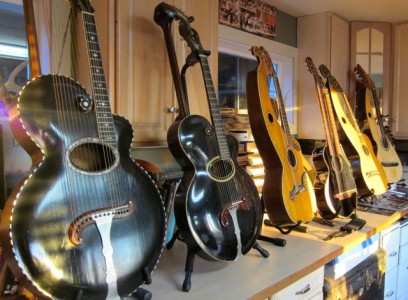 We all had a chance to compare harp guitars (see below from left to right) made by Holloway, Jay Buckey, Mike Doolin and others as well. We all concluded that there are some great harp guitars being built today! 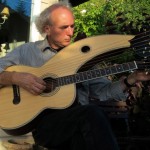 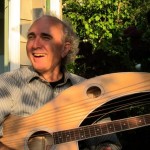 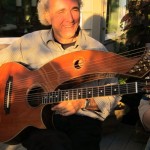 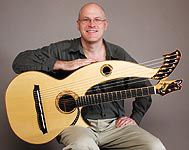 Legendary harp guitar builder Mike Doolin came by on Sunday night to share his harp guitar and gave us his latest insight into pick ups for the instrument. He also blew us away with an original piece and a jazz arrangement for the harp guitar. This guy is a true Renaissance Man who can both build and play the instrument at a very high level!

The amazing Luthier and go-to repairman Kerry Char has been keeping all of my instruments in playing order and some of our group got a chance to visit him at his workshop in Portland as well as at the Potluck he attended before the Saturday evening concert.  It was great for me to get a chance to hang with Kerry and noted Lute maker Ken Wryn and his lovely wife.  Kerry was able to give valuable feedback to Jay Buckey about one of the Ukrainian harp guitars Jay is marketing. 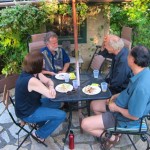 The Monday after the retreat several of us went to Gilmer Wood Co. in Portland to meet Marc Culbertson who is one of the world’s leading experts on rare and exotic woods. It was remarkable that he showed us entire logs of Amazon Rosewood and long planks of African Blackwood and just about every other wood used in instrument making. He shared some of his struggles to keep good wood supplies available to his customers remarking that an incredible rise in hobbyist builders has put a strain on the availability of good woods needed by master builders. 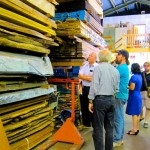 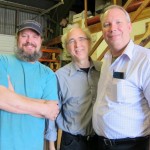 Jay and I then went to visit renown luthiers Jeffrey Elliott and Cyndy Burton. Jay will be using Jeffrey’s plans of the original harp guitar I commissioned and will have them made in Ukraine in the coming months. Jay took notes as Jeffrey gave him feedback on one of his harp guitars and shared photos of the construction process we went through to make my instrument. 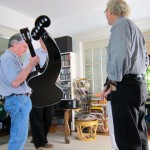 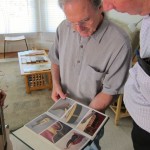 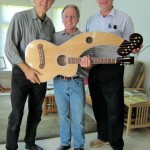 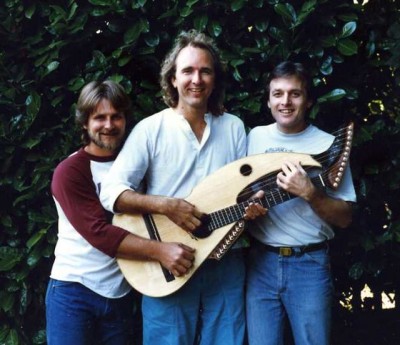 It felt like an historic moment discussing taking the ideas that Jeffrey, John Sullivan and I explored back in 1985 and applying them to a factory made instrument that will be made in sizable numbers on the other side of the world. Individual makers like Jeffrey have been trail blazers for decades but hand made instruments are costly. What Jay Buckey is doing is working to make these remarkable instruments of good quality and at an affordable price. With feedback this past weekend from such experienced makers such as Jeffrey Elliott, Kerry Char, and Mike Doolin this indeed may be one of the greatest turning points in the popularizing of the harp guitar in modern times.

Brent VanFossen said it well when he wrote:

I think we’re on the cusp of an exciting period for the harp guitar. Jay’s new company and the work you and he are doing to bring the harp guitar to players at such an affordable price is remarkable. I sure hope this venture is able to get the traction it needs to make the difference I think it can.

So was this Harp Guitar Retreat an historic event?  I will keep you posted.