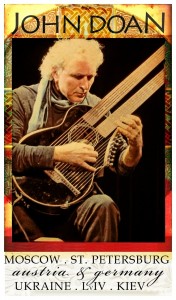 On Friday, May 11th and Saturday, May 12th, 2012, John plays in Germany at the Paul-Gerhardt-Haus in Schwerte and Aula der Realschule in Olpe as part of the international guitar night featuring Fancois Sciortino (France), Andrea Valeri (Italy), and Stefan Moenkemeyer (Germany). Even though John by himself will have more strings on his harp guitar that all the other guitarists combined each of them are so amazing that they will sound like they have as many strings and more than John. Be forewarned, guitarists attending may be inspired to do violent acts to their guitars after seeing this concert. The sponsors take no responsibility for the well being of such guitars.

On SUNDAY, MAY 13TH, 2012 John will play at Konzertscheune in Gefrees, Germany his Beyond 6 Strings show at 8PM. John did a recording with harpist Andy Lang who hosts this event in his barn. He has a unique blend of Beer brewed just for this small pub. Candlelight and a romantic atmosphere await you.

May 17th John will be performing at Moscow’s Expo Center for the National Association of Music Marketers (NAMM) first event in Russia. He has been asked to be featured playing the 20 string harp guitar introducing this instrument for the first time in Russia.

Also in Moscow on Sunday May 20th John will be play at Turgenev Hall that is a developed concert site built out of a former 18th Century Roman Catholic Church of Mary Magdalene.

From there he travels through Russia and into Germany.

On Saturday, May 26th, 2012 John plays at Kulturhaus Spandau on his 20 string harp guitar in his first Berlin appearance.

On Friday, June 1st, 2012 John plays at Parimal Concert in Witzenhausen, Germany in an intimate setting.

On Wednesday, June 6th, 2012 John will perform in Elfenwelten, Germany. John will perform his magical music in an intimate outdoor garden concert. This special setting is far removed from the rush of the modern world in Ammerbuch at a small seminar center near Tuebingen. The concert will be in a small outdoor amphitheater with about 90 seats.

John concludes his European tour on SATURDAY, JUNE 9TH, 2012 at Schmiedhaus Attersee, Austria. John will play solo harp guitar in this intimate setting at a renovated farmhouse built in 1860. It is located in a quiet location in the small town in Wildenhag Attergau, just 3 km to the Attersee.